If artillery perhaps was the most important weapon of the First World War, it was without any doubt the most lethal : the immense majority of the human losses were caused by its guns. This page is dedicated to this technique in order to give it a very superficial overview before accessing more specific and detailed themes like the ones included in the pages covering the artillery fuzes or the WW1 surviving guns.

A fieldgun: state of the art of the beginning of the century

The French famous '75' fieldgun can be used as an example to introduce the major concepts of the field artillery state of the art at the outburst of WW1.

Suddenly appearing in the French Army in the end of the XIXth century, the 75mm fieldgun M1897, developed by the captains Sainte-Claire-Deville and Rimailho led by the General Deloye, Director of the Artillery, suddenly established a new reference and became the state of the art for several years. Considerable guns of the World War One adopted some of its principles (or improved them) : single ammunition (joined shell and cartridge), hydropneumatic recoil brake and recuperator, and quick manoeuvring handling breech mechanism. 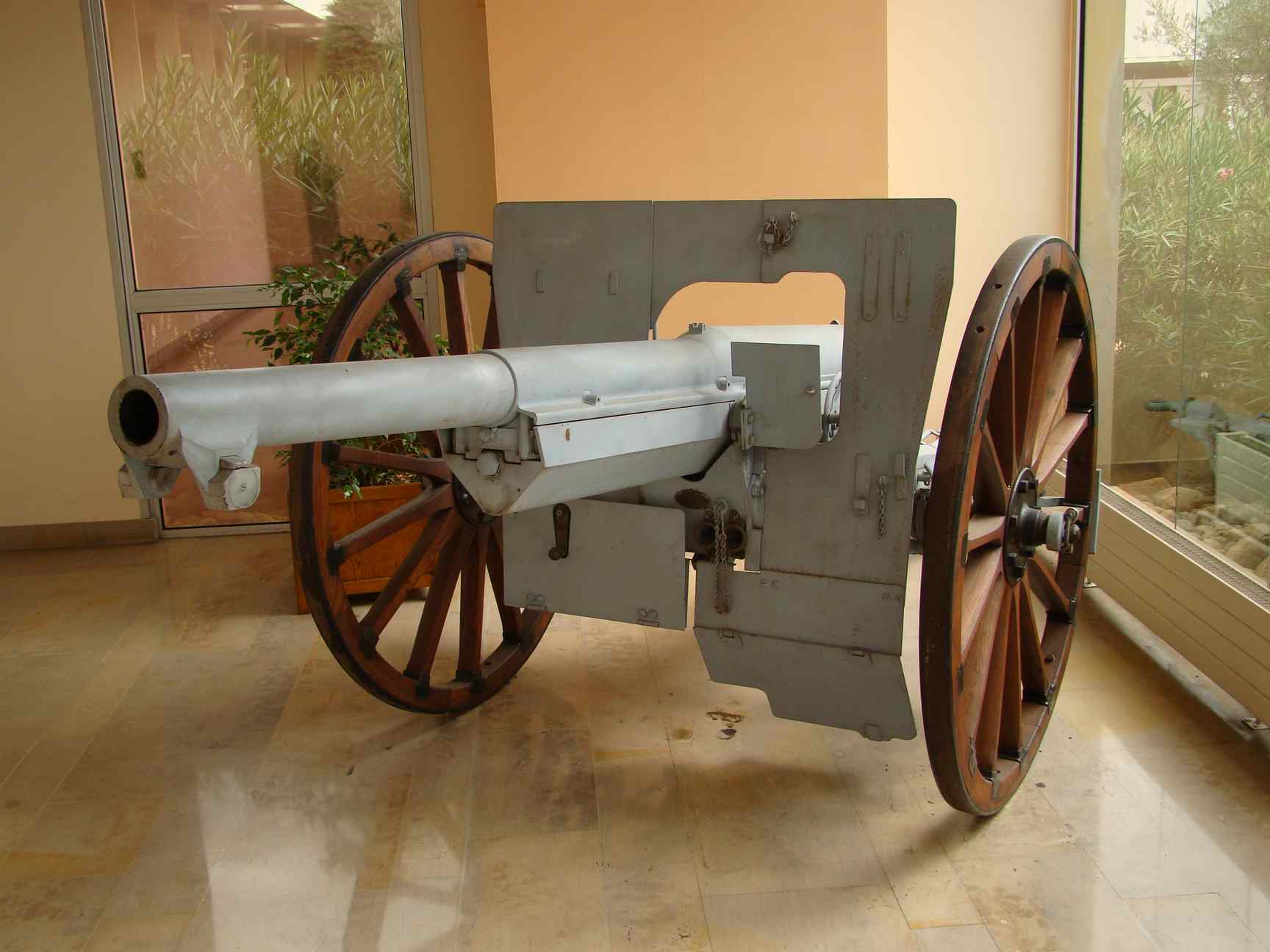 The 75 gun was composed of a forged steel tube weighting 460 kg, assembled on a mounting. The interior of the gun was machined with the calibre of 75 mm and included 24 spiral grooves. These rifling grooves gave to the shell a rotational movement around its main axis (spin), which improved the stability of its trajectory thanks to the gyroscopic effect. The length of the tube was of 36,6 calibres, that is 36,6 X 75 mm = 2745 mm.

The longer the tube is, the longer the shell is propelled by gasses, therefore the higher is its initial speed increase, improving the maximum range of the shot. For instance, the 2136 mm tube of the German gun 77mm FK96, lengthened in 1916 to 2743 mm (version 77 mm FK16) made it possible inter alia improvements to increase the initial speed of the shell from 460m/s to 600 m/s, and as a consequence the range from 5500 m to 10500 m.

The carriage was equipped with an axle receiving the wooden wheels, a trail ended with a spade to anchor the gun on the ground, an armoured shield to protect the crew, and a directional cradle for elevation pointing (between -11° and +18°) via the elevating crank and the range scale. The tube rested on the cradle by trunnions.

The gun was equipped with a hydropneumatic recuperator brake (or 'recoiling system') mechanism, intended to absorb the considerable recoiling energy at the firing on a total course of 1093 mm and to restore it automatically to draw back the gun in position without a need for re-pointing (see diagram).

Trying to give some figures, the departure of the 5.5 kg shell at the velocity of 625 m/s (at the gun muzzle) theoretically applied by reaction a backwards force of one ton approximately to the 1.14 tons gun, giving it an initial recoil speed of about 7,5 m/s... Without the brake system, the gun would have gone backwards for several meters, or, if only stopped by the spade, would have dangerously jumped on its position !

The shell was fixed to the cartridge containing the propelling load ('fixed' configuration). This solution highly accelerated the loading procedure of the 75 mm gun which could be done with one man only, unlike most of the other guns of the time for which shells and cartridges were often separately handled.

The ammunition was loaded and the empty cartridge ejected by the same back mechanism of the gun, called the breech, making this gun a 'breech - loader'. The handling of this device was to be fast, and had to lock in a firm and sealed way the bottom of the gun for the shooting operation. The device of the 75 mm gun, with its eccentric mechanism, was particularly well designed :

The firing device was acting by percussion of a needle through the breech on the bottom primer cap of the shell, started by simple traction on a cord triggering a spring-loaded hammer.

This gun was throwing its shells up to 6860 m, at the rate of a round every 6 seconds. The French Armies had nearly 4800 specimens of this weapon in 1914 and continued producing thousands of them throughout the war : more than 17300 fielguns guns of 75mm were in service in 1918...

The contemporary modern guns of most nations at the start of WW1 had adopted the majority of the devices present on this one, with some modifications induced by their technological choices, the weapon properties or its calibre. For instance, certain models of recoiling systems were of hydro-mechanical type (oil + spring), or the breech closing mechanisms could be of the 'sliding breechblock' (Germany) or 'interrupted screw' (England and France) type.

The main categories of artillery

Before trying to classify the WW1 artillery weapons in categories that will be useful below and in the other pages of this website, it is useful to intrroduce some technical vocabulary. Although the boundaries between these weapons types are not solid, and knowing they are varying upon the time they were used or the nation, it is frequent to distinguish :

Return at the top of the page
From the smaller to the largest calibers, from the short to the long barrels, from the fixed coastal or fortress to the self-motorized weapons, from horse-driven to railway mountings, the artillery of 1914-1918 is declined, for each of the belligerents, in several categories, each one expressed in a large variety of guns. Again, the boundaries between these categories are fuzzy and not universal.

The roles and effects of artillery

Viiting a former WW1 battlefield nowadays is enough to understand the terrifying effects of this conflict artillery. Grround turned upside down, several meters wide and deep shell holes side to side or superposed, the destruction of the defensive positions is often total, to such a point the infantry were obliged to use the shell holes to protect themselves when the trenches, shelters or bunkers had disappeared.

The fire power was phenomenal and never stopped to grow during the years of war. The immense majority of the fighting nations industrial power was dedicated to this weapon. From the first battles of the movement war in summer 1914 to the big offensives prepared by artillery crushing for days the stronger and stronger enemy positions, the evolving fugures are self-sepaking and incredible...

Other clues of this fire storm are offering themselves to any visitor of a former battlefield, just by a simple attentive view on the debris that can still be found : quantities of lead balls vomited by the shrapnell shells, deadly steel fragments of all sizes resulting from the deflagration of high explosive shells, heavy and massive fuzes, shrapnell or chemical shell envelopes. even sometimes traces of explosives... So much explosive and heavy materials sent at a speed of several hundres meters per second on limited areas had devastating effects on the terrains and soldiers.

It is a real men chopper that fell down on the troops taken under heavy shelling. and the wounds were often horrible and lethal. The wounded who survived remained deeply marked in their flesh and their mind, crippled and traumatized.

Disintegrated bodies, men cut in pieces, ripped off limbs, disfigured faces, soldiers bleeding to death by huge open wounds or internal hemorragies whose only external visible sign was the small hole created by a tiny shrapnell, organs destroyed by the explosion shock , bodies projected in the air and broken, intoxicated men, blinded, asphyxied, burnt, ... 80% of the Great War casualties were caused by artillery effects.

In some cases, just the secondary effects killed or wounded with the same efficiency : bodies projected away and internally destroyed by the shockwave, burnt by the explosion heat and flames, buried alive in the destoyed shelters, psychologic shock momently incapacitating or driving mad forever.

The Great War was the war of artillery, although its role did not allow any of the nations to win the decisive victory. This terrifying conflict allowed it to progress at an incredible speed in some years only, and gave it a key role in the battles that it will never receive again in the next wars. But above all, WW1 artillery has been the bigger mass killer of this conflict that still remains in the peoples mind as a bloody trail of physical suffering and inhumanity.

Relatively few modern books and even less websites are deicated to the technical or tactical aspects of this very important weapon of WW1. I am trying although to keep up to date my reference list on the following page : References and links
Return at the top of the page